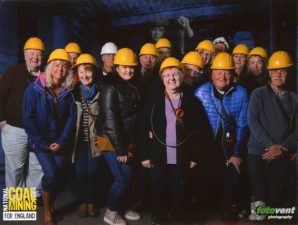 On a bright sunny Sunday morning nine cars, one of which was the immaculate MG Midget belonging to Mark and Janet – our visitors – set off from The Old Stone Trough on Roger & Olive’s Run. Although they could not be in attendance they had handed the execution of the route to Frank & Janet, and the Run was lead by Richard & Angela.Our destination was the National Coal Mining Museum at Wakefield, and the route was navigated using Roger & Olive’s instructions. All the cars managed to keep together until within seven miles of our destination but there we all missed a left turn, doubled back and, can you believe it, some of us missed it again … Yours truly seemed to get totally lost and, going in wrong direction again, was bogged down in Bog Green until saved by Richard who, like a knight in shining armour, came to our rescue!

The museum mine tour commenced with a – very intimate! – lift decent followed by a guided tour deep into the mine. There, it was cold, dark and dirty, highlighting the working conditions, and dangers, which the miners routinely endured each and every day. For us, though, it was only a glance into their lives – and an interesting and informative experienced glance it was – and one, all agreed thankfully, we personally did not have to endure and which could only increase our respect for them.

Angela, Irving, & Gail decided to remain above ground and enjoy the by now the hot sunny weather. On returning to the surface we proceeded to our late lunch venue, the Kaye Arms, where we enjoyed our chosen meals, all organised & overseen by Janet.

Thank you to “Rich Tea” – our Museum Guide – Roger and Olive, Richard and Angela, Frank & Janet, and Gail for this write up.