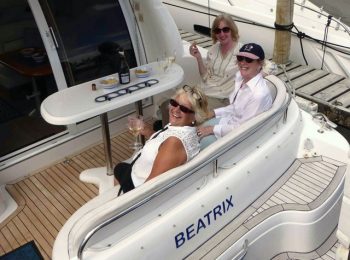 The July Run was put back a week – due to some members taking a few days holiday in N. Ireland with Scenic Car Tours – and took place on July 8th. However, this monthly Run was eagerly anticipated, as Frank and Janet had announced a Return Trip to Beatrix moored on the shores of Windermere.

Seven cars met at The Old Stone Trough Hotel, whence they were taken on a scenic journey via Waddington over the Fell to Newton and Slaidburn, finally ascending the dramatic pass to Bentham, with the sun shining throughout. They arrived for a coffee stop at Ireby Green Farm where a further four cars were waiting to join the happy throng.

The drive into the Lakes highlighted just how hot and dry the recent weather had been. Fells, usually green and lush, were brown and bare, softened only by the green of bushes and trees.

Two boat trips were needed due to numbers, so Beatrix got to transport two groups of extremely grateful MG Club Members across the Lake, on what must have been the sunniest, hottest, July Sunday for many years. The scenery was superb, the breeze a bonus, and everyone agreed that Frank and Janet deserved huge THANKS!

Barbara wrote this but also – with Mick – organised a splendid June “Coast to Coast” Run. From Morcambe, via The Fat Lamb – and one of Paul Bonsall’s rural routes to the fascinating Carlisle Air Museum, and back over the “Roof of England” – we traversed the Dales to the East Coast. A lovely, sunny journey – rendered even more delightful by the spectacular array of classic cars and motorcycles travelling west in the Beamish Rally – to the Ravenhall Hotel overlooking Robin Hood’s Bay. I think that we may well go back!