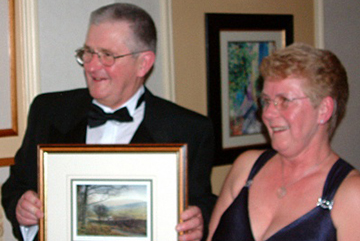 This years event took place at The Northop Hall Country House and Hotel in North Wales.

Members arrived oer the course of Friday afternoon and congregated in the Bar!

Friday evening saw the members tucking in to a delicious meal, washed down with a most palatable selection of wine.

Saturday is the main run day and unfortunately it dawned rather damp and miserable. However hoods were down for the start and actualy stayed down for quite a while. The run took us through Mold and out into the countryside through villages I can’t say or spell.

Coffee was taken at the Saracens Head Cerrigydrudion by which time the rain was falling freely. However we

were warmly welcomed by the Landlord and his team.

The run then went on to Bala where, following a tour of the Lake lunch was taken at the The White Lion where again we were given a really warm welcome and given exclusive use of the Dining Room. Following an excellent lunch the run returned to base although some members stopped off at a Glass Blowing workshop to part with there hard earned cash. 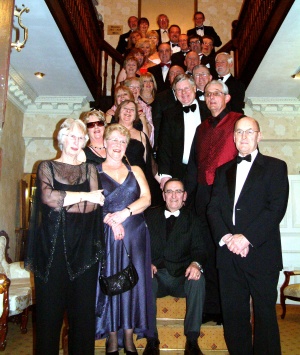 Saturday was Gala Dinner Night and without exception the members all scrubbed up well. The members congregated in the Bar, again, and some were reluctant to move to the Dining room as Barnsley were beating Liverpool in the FA Cup. An Excellent dinner was provided by the hotel, and was followed by Santas arrival to distribute gifts.

Some presents were rather risque, but seemed to go down well with their partners.

The evening also saw a presentation to the retiring Chairpeople, who also doubled up as Secretaries and General Dogsbodies. On behalf of the membership Jim and Christine were presented a watercolour.

The formal part of the evening concluded with a performance by our own rock star Huffers. John plays Guitar and sings too.
His repertoire consisted mainly of music which the members remember from there teens, draw your own conclusions as to which era it was. Toni provided an impromptu performance while john recovered his wind.

The finale was a choral performance, with actions of the hit from Grease “She’s the one that I want”, by the members split between Men and Women. A video is available at a relatively low price and a Health Warning.

Sunday was wet and miserable but the team turned out in force for another run. This time the tour followed the coast road to Conway. A comfort break was thwarted when the Loos were shut!. So we quickly made our way to the Pub! The pub turned out to be the very first property in Wales to be given a Licence to sell liquor. and again we were warmly welcomed.

Following a coffee we departed down the valley but the group  was separated by traffic lights on a particularly narrow bridge. Hence two different routes home were followed although by luck one car did meet up with the main body of cars, in a Pub of course!

Sunday night was a less formal evening but yet another excellent meal was enjoyed by the company.

The weekend was thoroughly enjoyed by all and the members are now looking forward to next years Christmas bash, now confirmed as a return to Northop Hall.