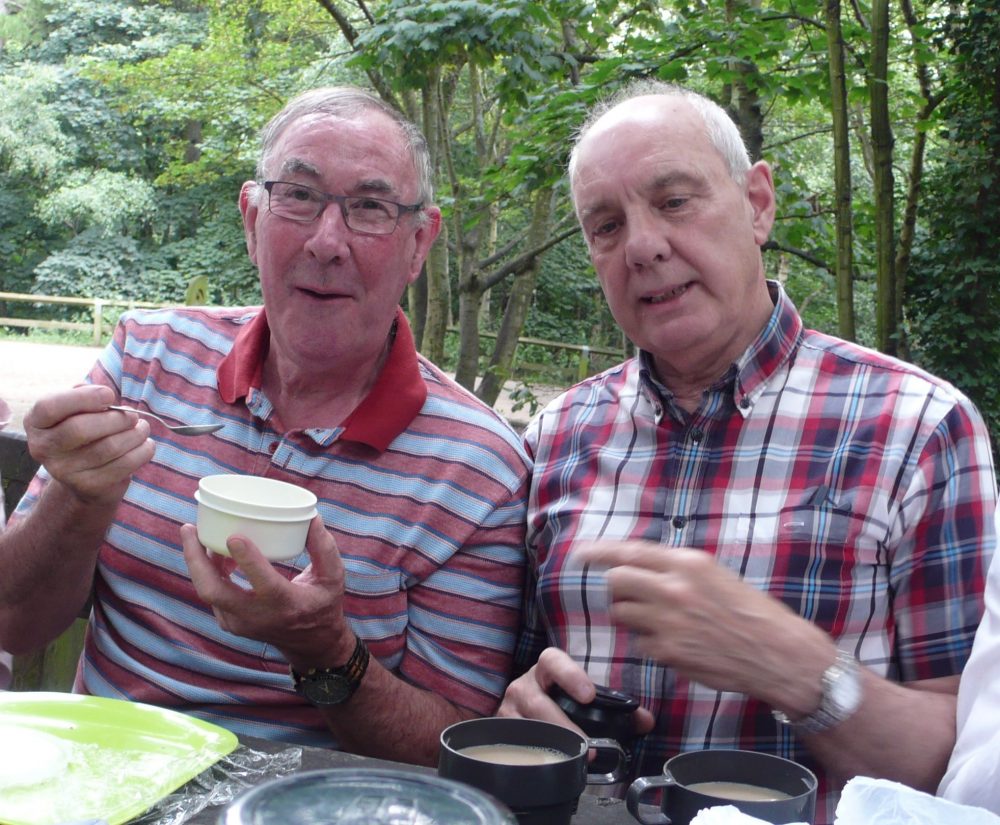 Gail tells us about his month’s Sunday MG trip. Frank & Janet planned the run but due to a better offer – being away on holiday – Roger & Olive volunteered to lead it instead.

Our morning coffee & refreshment stop was pre arranged but when, as requested, Roger tried to contact the Butchers Block to pre order our breakfast choices prior to setting off this, alas, proved to be a problem! It appeared that the proprietors had sneaked off on holiday too, hence the cafe was closed, and it was time for quick thinking. Samlesbury Hall was chosen, which proved ideal, more or less on route and with ample parking. The route Frank and Janet had organised was excellent, very detailed and with points of interests: Carl Foggarty’s house and Frank’s passion – golf clubs!!! On a more serious note, the route must have taken a great deal of planning: lots of quiet roads, with only one hiccough for some, missing a right hand turn and, surprise, surprise! it wasn’t us this time.

Having arrived at our final destination, Formby Point (National Trust) Red Squirrel Reserve, parking all together proved a little difficult as it was so busy, but soon everyone found a place and the weather held up. Armed with picnic baskets it was time for lunch, before exploring the many walks and the beach. I’m not sure about other members but we didn’t even catch a glimpse of a squirrel! They seemed extremely good at hiding and, it appears, we’re not good at seeking … Although we had a enjoyable day, the same cannot be said for the journey home; the heavens opened and the rain lashed down. With roads and motorways awash, driving proved to be challenging, to say the least – a dramatic end to a great day.

But there was more to come: The N.A.S Car Run organised by MG – Alfa Spares attracted Dave and Miranda, Fred and Betty, Mick and Barbara and Neil and Janet. Though the weather was at times, er, “interesting” the Run was plotted over an excellent course and thoroughly enjoyable, as was the meal and presentations afterwards. Jason from MG – Alfa Spares – and his delightful little boys – told us that we had raised £1500 for the charity.

Fred and Betty, Dave and Miranda and Geof – joined by Eric’s friend, Jan – took in the delights of Llandudno to take part in the Snowdon MG Run. Magnificently organised, it comprised a remarkable 200 cars, a drive around the Great Orme and one hundred miles around north Wales’s impressive scenery. We met many old friends, and there were prizes for all!