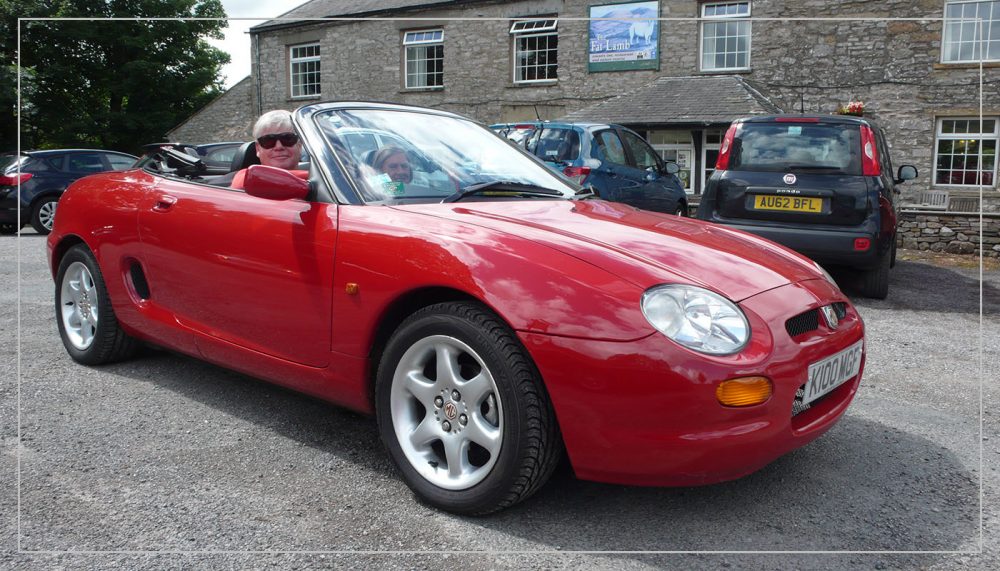 This is a sad month:  David, one of our most stalwart members, has passed away after a long and bravely borne illness.  A kind and seemingly unassuming man, he possessed great goodness and a dry wit, and he will be fondly remembered with tears of laughter as well as sorrow.

He always welcomed new members warmly – although Betty, then a secretary, still remembers a very young Burnley solicitor – and his wise and fair counsel has always benefited the Club.  Despite life’s exigencies, he supported every Club event in legendary fashion…the MGOC, as well as Burnley FC – the love of his life!  And well justified too, when Burnley were promoted to the Premier League…

Never daunted, even while ill, he completed the NC500 with Christopher as one of his last MG trips.  But his MG adventures will long be immortalised in Burnley and Pendle lore.  Precious memories recalled by Gail and Irvine of his trips to France, a masked ball at Whoop Hall and a none too sober night after the bar closed at the pub they stayed in near Chatsworth – luckily, given the ensuing jollity, they had taken all the rooms…  She also tells of David and Enid’s cooking skills on Janet and Neil’s self catering trip to Scotland:  “…they were like the Burnley & Pendle answer to Johnny and Fanny!”

France features in Neil and Janet’s recollections too:  trips to Normandy and Le Mans with leisurely and chatty lunches.  Ireland was another favourite destination for David, Enid and their MG and, after her passing, he still returned to Ballymena and Cork, enjoying the camaraderie of his longstanding MG pals from all over the British Isles.

Angela recounts that, preparing for a weekend away, David and Enid left their bag on the bedroom floor and the cat – recognising this as a sign of an impending and resented departure – left “a deposit” in it.  It had to be washed and dried before they could leave.  Oh, and one that Gail “forgot”, (but permitted Angela to tell me) was that when travelling with David by rail he spotted a pile of steel girders by the trackside.  Was this “the steel for your corsets?” he enquired.  “No”, she replied, “I use the wind up type attached to the bedpost!”

Barbara remembers David’s tremendous efforts supporting – and enjoying – the Pendle Run, as well as taking part in the Christmas Cracker Run and Goodwood Revival and always in period costume.  Perhaps that related also to his enjoyment of Gilbert & Sullivan?  Certainly, he was heavily involved in the classic car world and knew many of our entrants personally.

Roger reminds me of one Sunday Run.  After twenty year’s ownership, he and his MG F dramatically disappeared in a cloud of steam when the head gasket blew but, imperturbable as ever, he bade us continue without him while he had the car recovered.  The fate of that – otherwise good – car is also a mark of the man:  he gave it to the apprentice at the garage, who serviced it for him, to repair and use for his own.

Predeceased by his first wife and then, more recently by Enid, David will be greatly missed by everyone who had the privilege of knowing him.

Our condolences go once more to his family, and thank you to everyone for these fond memories and themes.