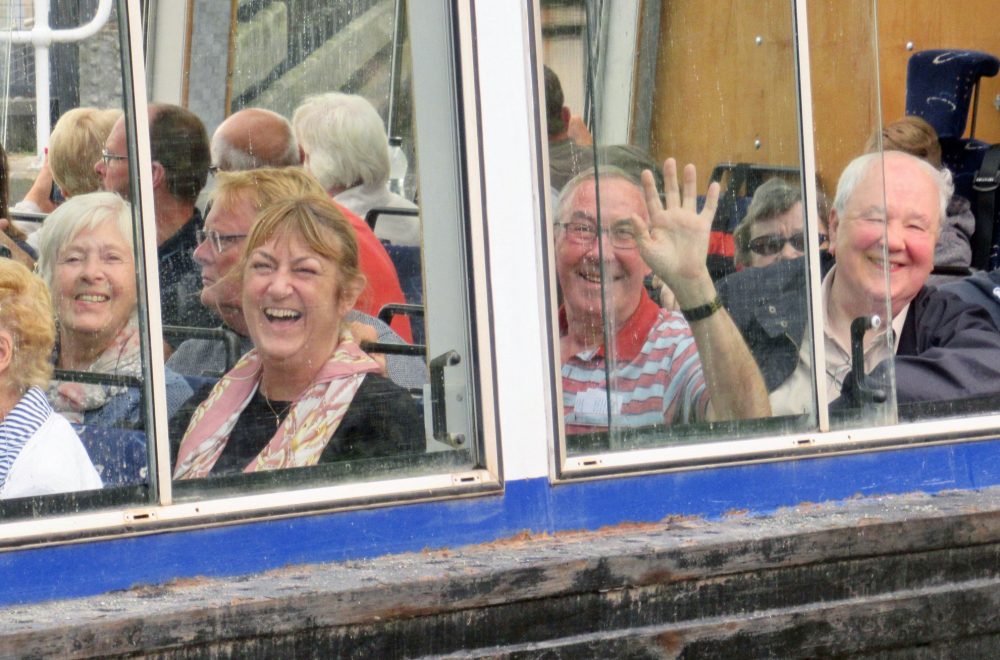 Richard and Angela – after a year’s delay, and another week due to illness – had both recovered and led us on their interesting, long awaited Run. And what a run it was! Nine members and three dogs, in four MGs – Irv and Gail sporting their highly polished new chrome wires – and, to use the Club’s standard terminology, two German things, met up at Charnock Richard services whence we made the short journey to the Anderton Boat Lift. Sadly, Fred and Betty were unable to join us as Fred, although improving, was still poorly.

The Anderton Boat Lift is a very substantial Victorian hydraulic machine, although its engineering has been revised three times. Originally lifting one barge, balanced by a falling second barge, each in a ram powered caisson, corrosion from the high salt content of the local water forced an early conversion to chevron geared electrically driven cables. However, in its recent restoration with modern materials, it is once again ram operated up fifty-four feet, between the River Weaver and the Trent and Mersey canal basin. An ingenious system of gates seals the waterways and the caissons, and a further gate on the canal protects the top of the lift, preventing any runaway barges from breaking through to a rather long fall!

But, before ascending the Lift, we were entertained by a boat trip along the Weaver to Northwich, turning just before the basin there and its swing bridge. On the way, our witty and informative guide pointed out the local features including a WW2 concrete barge originally intended for Normandy and, maintaining the WW2 connection, a Bren gun training ground – still in use for firing practice until the present time …

Thanks to Richard and Angela, we enjoyed a lovely sunny day out and picnic – and so did the dogs!