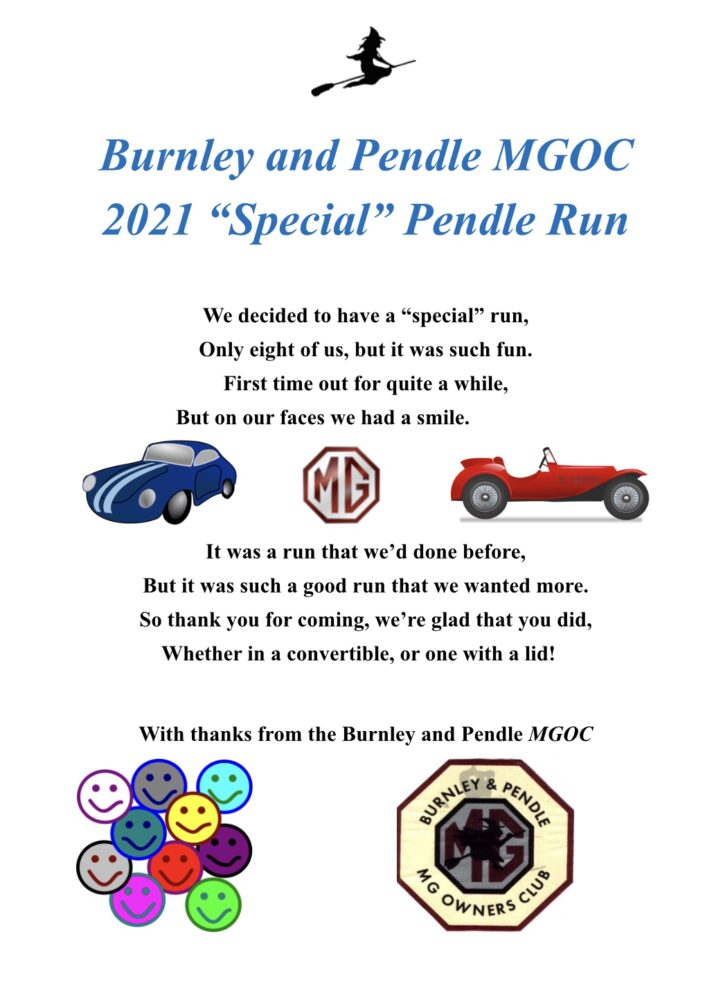 The Pendle Run is cancelled,

We’ll have a mini Pendle Run

Led by Betty and Fred.

And so it came to pass that, against all odds, a Pendle Run (of sorts) was held on Sunday 6th June 2021 after all. The odds had been stacked against it happening again this year due to the Covid 19 restrictions, but following the official cancelling of this year’s run, when we telephoned six of our friends in the Llandudno MGOC to tell them the news, they told us they were still planning on coming, but said they would be following the route of the 2017 run, one which they had particularly enjoyed. After some discussion we agreed to join them and check out the route beforehand (in case anyone had been building any new motorways across the Yorkshire Dales in the past four years!). It’s as well we did, because we missed a turn in Dent and found ourselves in Sedburgh. It was too late to re-trace our steps, so we headed down a couple of familiar A-roads and arrived at The Buck Inn at Paythorne just in time for our pre-booked Sunday lunch. Phew!

Having found out where we went wrong, we did another dummy run (no pun intended!) during the following week and this time successfully negotiated the route and got the timings sorted to include a leisurely coffee stop. The following Saturday (5th June) we arrived at The Old Stone Trough for an overnight stay before the run, only to find that two of our friends were missing. Derek and Elizabeth had been unable to make it due to Derek being confined to bed with very painful back trouble. Ouch! I know the feeling. Only John and Dolly along with David and Anne were there to greet us. We hadn’t pre-booked an evening meal and as it was Saturday, the restaurant was fully booked. However, the owner was on hand and asked if we would be happy to dine in the old breakfast room, which had been refurbished as a meeting room. We gladly agreed and enjoyed a very nice dinner in very pleasant surroundings, which were much quieter than the main restaurant.

After a good night’s rest and a hearty breakfast, we ventured forth into the morning sunshine with tops down and fingers crossed! The run was better than any of us expected, or remembered from 2017 and the sun shone brightly all day, as it always does for the Pendle Run, of course. The scenery through the Yorkshire Dales was as spectacular as ever, with several “places of interest” noted on the original route map, making our trip even more enjoyable. We had a leisurely stop for coffee at a quiet farm cafe and arrived at The Buck Inn at Paythorne bang on time, where we were greeted by Rachel and again enjoyed one of the best Sunday lunches this side of the Penines. We were, of course, back in Lancashire by now! As is our tradition with the Pendle Run, each guest left with a goody bag containing, amongst other things, a bottle of Old Speckled Hen beer. We also included a “2021 Special Pendle Run” scroll. A goody bag was also sent to Derek and Elizabeth with our good wishes for a speedy recovery.