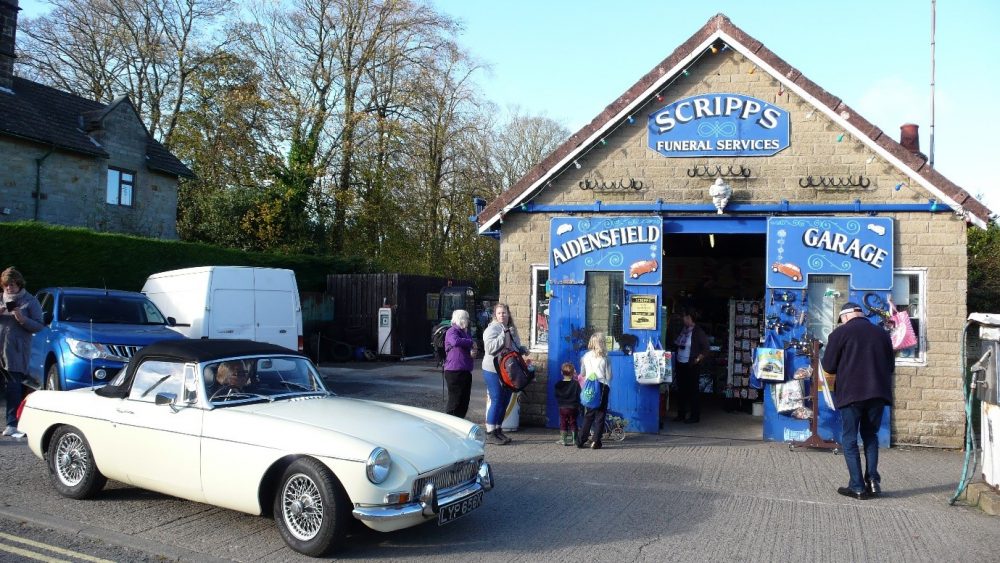 This month’s run was one of Richard’s famous “Magical Mystery Tours”.
And so it was we left the Old Stone Trough at 10.00am towards Skipton. Then to the highways and byways, soon arriving at our coffee stop in Cracoe. Staff shortages, bacon butties and full breakfasts ordered, meant our twenty minutes stop lasted over an hour!
Not to worry; Richard re-configured the route taking us through some delightful countryside. We passed Kilnsey Crag, a rocky outcrop several hundred feet high, where we saw a bright blue anorak climbing the sheer rock face. What some people will do for fun on a Sunday afternoon! Although the run was shortened, we still found time to visit Coldstones Cut, a magnificent structure just outside Pateley Bridge, famous for its 360 degree view of the Yorkshire Dales. We had to climb Greenhow Hill, a bit of an effort, but worth it. As I said before, “what some people will do for fun on a Sunday afternoon”. We returned to the car park below invigorated and refreshed to complete Richard’s run with a well-earned and excellent Sunday lunch at The Hermit Inn in Burley Woodhead.
Also, this month 14 members went to the Ravenhall Hotel, overlooking Robin Hood’s Bay, for a four nights stay, superbly organised throughout by Barbara. Eleven of us had a run there on the Sunday and were joined by the others on Monday. Monday also saw us visiting Whitby; Tuesday we travelled on a steam train from Goathland (Adensfield in “Heartbeat”) to Pickering; and Wednesday we went to a stained glass works in Cayton, followed by a visit to wildlife artist Robert E Fuller’s gallery in Thixendale. Our afternoon ended with a visit to the picturesque village of Robin Hood’s Bay. Thanks go to Richard and Barbara for the runs and Fred for this write-up.